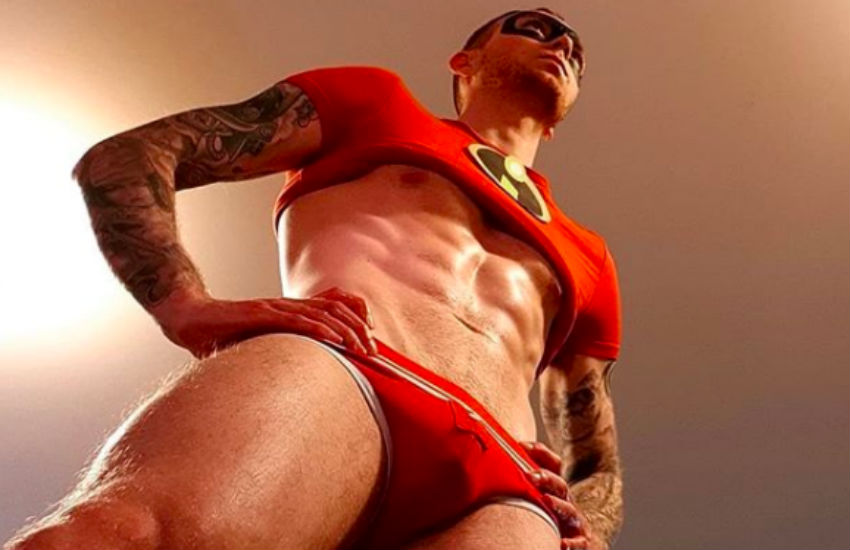 I’m just gonna say it–underwear as we know it is boring as hell! Briefs? Boring. Jockstraps? Boring. Unitards? Boring. Where’s the pizzazz? The drama? The gays deserve better, and better they’ll get! This list has got something for everyone. Here are five sexy underwear that are just Halloween costumes.

1. Bottom Half of a Horse

There’s an element of scandal when you show up at 9:00 AM in your sexiest underwear beneath your work clothes. Let everyone get a glimpse of who you really are, HUNG, in this daring bottom half of a horse costume. That’s right. It takes a daring and WELL-ENDOWED MEMBER of the office to sport such a bold look on a regular workday. Tell Tim two cubicles down from you that your eyes are up here, and your hooves are down there. And you’ve got a fat dick.

Nasty Pig is QUAKINGGGG! Nothing is quite as romantic as a full display of peacock feathers. If you want to show off your flirty side, tempt your partner with a full-body peacock costume. This overstated outfit says “more is more” and “come get this pussy (peacock bussy)” all at the same time. Whether you want to spice up your Wednesday night or experiment with avian role play, you can’t go wrong with this piece.

Take advantage of the fact that your entire friend group looks exactly the same and take the next underwear party by storm in an homage to Heidi Klum’s iconic 2016 Halloween costume, 6 Heidi Klums.

Okay, so is this just underwear that’s a Halloween costume that’s now underwear again? Perhaps. Fashion is cyclical and humans were not meant to thrive under capitalism. Not only are you going to get a chance to flex your German accent skills after that two-week trip to Berlin last year.

5. Gimli from Lord of The Rings

Don’t get ready–stay ready to get hot and heavy in your officially licensed Andrew Christian x LOTR Gimli set!!! With no less than eight vestigial layers of chain mail, armor, and prostheses, a quick steam room hookup with your spin instructor will turn into upwards of an hour of unloading all the sexy and book-accurate undergarments, but not the beard, of your favorite member of the Fellowship of the Ring. Then, when the time comes, let him know what that axe do.

There you have it. Whether you want to have a night on the town, or just treat yourself to feeling sexy every once in awhile, you can rest easy knowing your underwear is cool, sexy, and never boring!