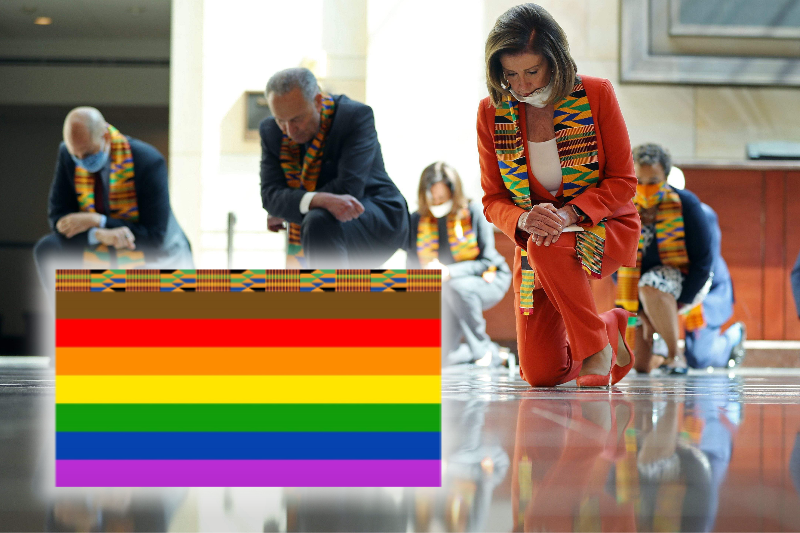 Nancy Pelosi spoke on behalf of the House Democrats to reveal a new Pride flag with an “exclusive” Kente cloth stripe to “celebrate two stones with one bird.”

The flag, designed by popular non-black designer Sarah Burton, will fly at 3/5th the height of American flags and will symbolize how the legislative branch “doesn’t see color, but rather sees all the colors, especially black.”

A press release from House Democrats stated that the 50/50 poly blend will showcase the work of the Civil Rights and Gay Rights movements, two equal struggles. “We used to have our pride flags made of cotton,” said House Majority Leader Steny Hoyer. “But in today’s climate, that just didn’t seem right.”

The Congressional Black Caucus issued a mixed response stating, “While the gesture is nice, why is the stripe so small and separate from all the other colors?”

Ben Carson, the Secretary of Housing and Urban Development, broadcast his dissent on Twitter calling the move by Democrats a shallow performative response akin to virtue signaling. Pelosi immediately clapped back at Carson, calling him the Resident Diversity Hire.

“Carson is just an Old Boy and it is about time we Do the Right Thing,” said Pelosi. “As for this chica, well, She’s Gotta Have It!”

Voters further criticized the Democrats’ response for overshadowing other important legislation, like the Justice in Policing Act, which was tabled “until everyone has read that DiAngelo book”.

When asked about her egregiously gross voting record for anti-black legislation, Pelosi replied with a GIF of Viola Davis serving side eye on How To Get Away With Murder.