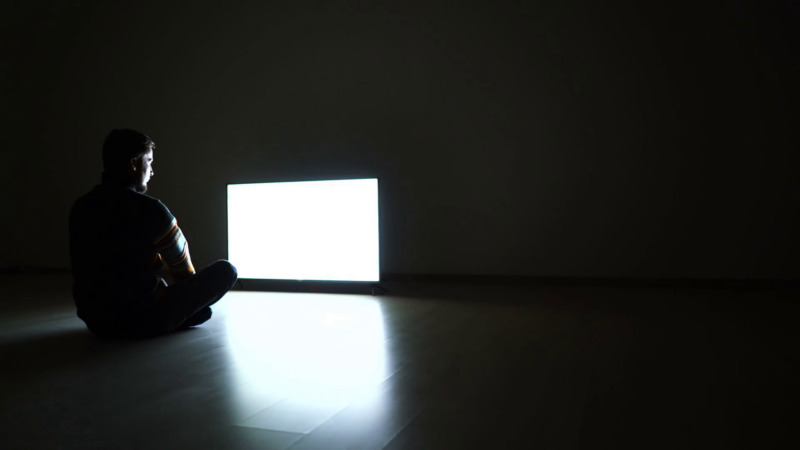 NEW YORK, NY— While the queer youth of today may not know, the elders of the community have spoken of LogoTV. A gay network, with some original shows and also  reruns of Buffy the Vampire Slayer and Queer As Folk with all the sex scenes cut out, so you never actually got to see Hal Spark’s butt.

Ever since RuPaul’s Drag Race went mainstream, you may have forgotten about LogoTV, but it still lives. Gone are the days of TV movie versions of Noah’s Arc with commercials. Now, the channel has pivoted to just messages from a place of emptiness and darkness. A screen with nothing on it, because they don’t have Netflix original money.

The screen pulls you in. While you hear no voice, a thought pops up within you seemingly from some distant outside force, “Remember Curl Girls?”

You think, no…I don’t, but then suddenly visions emerge.

Was there really a reality show about lesbians who surfed, or is that just a memory from a dream you had in 2007? You can’t tell.

You try to remember if there really was a gay version of The Bachelor, or if that was just a Saturday Night Live sketch on NBC.

The void speaks, “We had our own SNL, it was called the Big Gay Sketch Show and it also stared Kate McKinnon…”

You pull away in horror, but the void sucks you back to it. It’s getting late and the void seems now to only be commercials for PrEP and male baldness remedies.

But it’s comforting. It’s safe. You see yourself in the void.

At first you don’t recognize yourself. You are age 13. You are watching The A-List.

You try to ask the young version of you why, but inside you already know….it was all you had.

The void let’s you sit back. You aren’t scared of it anymore. You thank it as if to say, “you had my back all those years ago.”