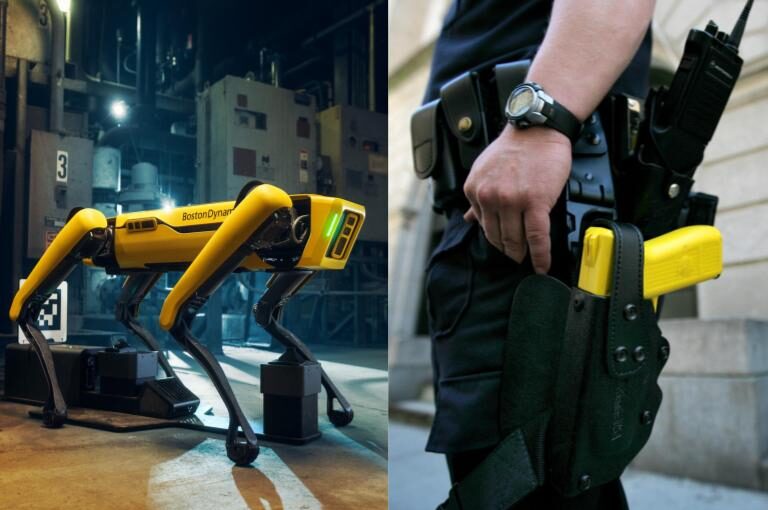 Thank God for America’s highly militarized execution squad — the police! That being said, no one is perfect all the time. Veteran NYPD officer Kolby K. Knight cannot tell the difference between his taser and the killer robot dog that will soon be unleashed on an unsuspecting public.

Policemen have the hardest job of anyone ever on this earth and Officer Knight can tell you that firsthand. After six months of teaching rookie officers deescalation techniques, his brain is full! When he terrorizes the working class, he has so many little toys in his utility belt, he couldn’t possibly tell the difference between his supposedly non-lethal taser and his million-dollar carnivorous canine.

More often than not, when he wants to reach for his “zappy zappy”, he forgets that he gave that name to both his taser and his sleek dystopian hell hound. It’s understandable if he, or anyone, would reach for their tiny yellow handheld taser, but instead grab a remote control for a terrifying robot dog with only one instinct — the instinct to kill — into an unbridled rage which can only be calmed by the taste of human blood.

As much as Officer Knight loves to see his own personal quadrupedal quarterback quickly quash quivering queers, he wishes he could mix it up every now and then with a little bit of taser action. However, in the heat of the moment, can we really expect him to be able to tell the difference between a bright yellow taser and what is essentially a Gatling gun with teeth and legs? And that’s not the only thing Officer Knight has trouble telling a part. Mary-Kate and Ashley! Jessica Chastain and Bryce Dallas Howard! Due process and tyrannical fascism!

Luckily, he’s not worried, and neither am I. Five billion tax dollars a year are spent making the NYPD cooler and more dangerous than ever with tricked-out military-grade riot gear and killer robot dogs. And what an investment in our community it is. I couldn’t even imagine our tax dollars being wasted on less shiny things like welfare programs for the working class or housing the estimated 80,000 homeless people in the city. We definitely needed robot dogs. I mean, you can’t gun down an innocent person with a regularly scheduled compost pickup!

So what if they can’t tell the difference between a taser and a killer robot dog? I sleep soundly every night with the knowledge that our boys in blue might sometimes accidentally command a standard-issue cyborg Cujo to mercilessly tear someone a part. Every policeman is an American hero, including New York’s own Officer Kolby K. Knight and that one guy who fucked me in the woods with no lube and screamed, “I HAVE A FAMILY!” loudly as he came.