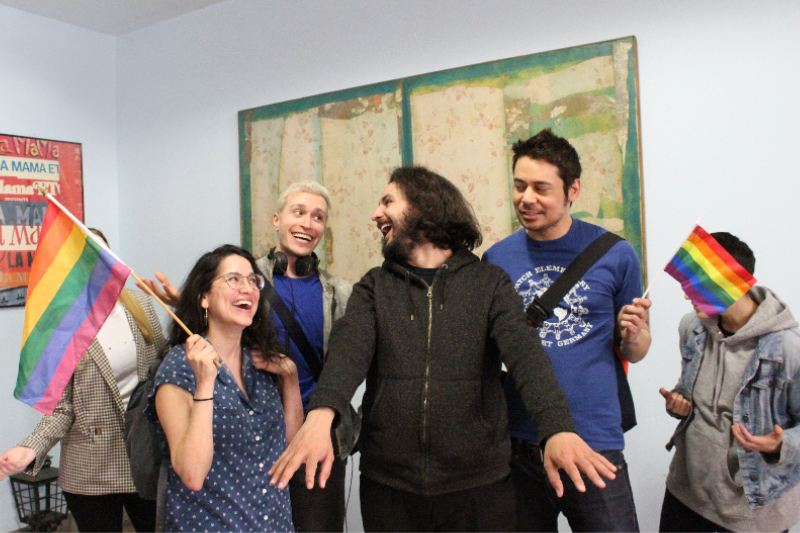 Cincinnati, OH—A gathering of straight allies dedicated to supporting the LGBTQ+ community recently took place between two queer people who were having a conversation.

Maya Berman and Jessica Anello were reportedly chatting about oat milk at their local cafe when fifteen straights in rainbow regalia crammed between them and began their meeting.

“I tried to say ‘Excuse me’ but they just shushed me, saying they were trying to help the queer community and I—” Maya began to explain before being pushed into a broom closet by a maelstrom of allies.

The allies (or “pal-lies,” as they prefer to be called) discussed their plans to show support for queer spaces by patronizing local gay bars. “We have to pack clubs like Stonewall, Man Cave, and Tit House with straight bodies,” Chester Blanc, leader of the allies, announced. “It’s so important for the LGBTQ+ community to look around in queer spaces and see a ton of straight people supporting them.”

Jessica reportedly confronted Chester, stating that she and Maya had “been bonding over our shared queer experiences, like oat milk, since she’s a lesbian and I’m pansexual, when you interrupted.” Jessica and Maya attempted to return to discussing oat milk, but their efforts didn’t last.

“We support you. I didn’t choose to only like the opposite gender. My penis is only for women, but my heart is open to everyone,” Chester declared from a megaphone, while standing on the cafe counter and preventing the barista—also queer—from doing her job. “I was born this way. If people want to label me as straight, so be it. I’m here, I’m straight, I’m an ally, get used to it!”

In the week following the meeting, the group of straight allies continued their support for the queer women by showing up at Jessica’s office with rainbow balloons to emphasize their support for her queerness.

“She didn’t really seem to appreciate it,” Chester noted, “Something about her not being out at work, I think, but I couldn’t hear over the strippers we’d brought in. Female strippers,” he added proudly, “dancing to Indigo Girls.” Half of a cake was brought to Maya’s office, in support of her “half gayness.”

“I appreciate allies who want to help us fight for rights and to end discrimination,” Jessica said, “but they’re getting way too involved in other people’s personal lives—which is something only LGBTQ+ folks are allowed to do.”