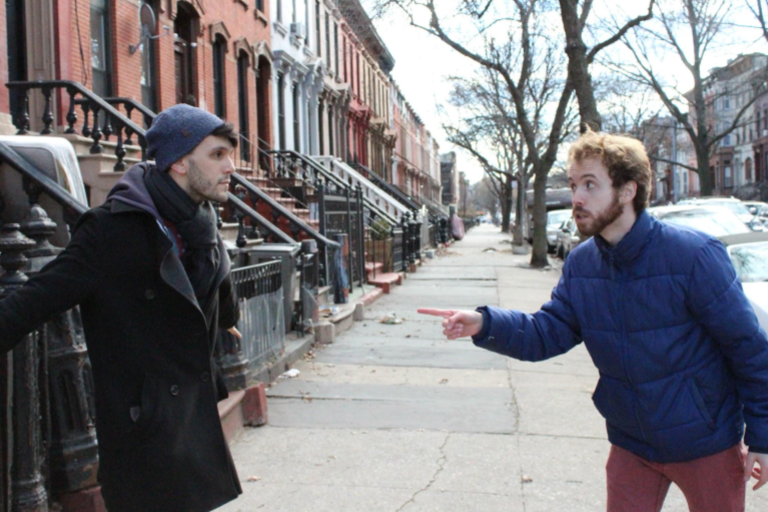 Incredible news out of Eileen’s, the favored brunch spot for sporting gays: two men have officially crossed the two hour mark of arguing two extremely similar points with different vocabulary. This special report comes courtesy of the mens’ waiter, Anthony Petcowsky, who has been waiting with bated breath for them to realize their arguments are both similar and also dumb.

The two sparrers, Matt Gerber and Bryan Mackenzie, have been quarreling buddies for years, but they’ve approached this astoundingly inessential topic with freshness and vigor. They’re exhibiting the classic signs of a debate for the ages: rolled eyes, choppy hand movements, and the tunnel vision found only in the most worthless of discussions. Neither one has taken even a second’s break to acknowledge that they’ve finished their food and received a check.

Gerber and Mackenzie are now stuck in a shouting match of “Can I finish?” and “But no, can I not finish?” This could escalate for hours!

This is truly an impressive feat as the topic of argument doesn’t seem to be personal to themselves or to anyone really. Such a display, from two dudes who do not give this much effort elsewhere in their lives! They are out for blood and clearly emotionally invested in taking this fucking worthless discussion as low as it will go.

WOW! Mackenzie has just thwarted the ultimate interference, completely ignoring a new Instagram notification. He typically reviews all social media notifications within milliseconds in order to allow enough time for a pithy response hours later. Yet the siren song of a comment on a post from over three months ago is not loud enough for this vapid fucking argument. We’re receiving reports that this was a tactic employed by the restaurant host who desperately needs that two-top back, but this train of rotten garbage is moving full. Speed. Ahead.

As the minutes tick up and Petcowsky’s potential wages for his shift shrink down, it’s becoming clear that this could be a world record breaking situation. Many think that the Grating Debate of 2014, in which two friends spent an entire vacation in a fake disagreement over the role of straight people in Angels in America, is the kind of stupid gay dramatics that can’t be topped anytime soon. Both Gerber and Mackenzie have plans later today and also some shred of intelligence-will that be enough to take down this epic repartée tragique?

UPDATE: In a stunning reversal, the two friends have uttered the phrase an entire restaurant was waiting for. After catching the eye of a cute blonde with large wrists, Gerber has finally recognized the volume of his voice and bitchy active face. He’s now leaning back in his seat, hands thrown up, uttering that classic relationship-saving phrase. That’s right all, Gerber now wants to ‘agree to disagree’.

There’s a palpable sense of relief in the air-Petcowsky has now left for this third round of asking ‘so are we all set here?’ with a renewed pep in his step. Mackenzie is still engaging with the point made at least 20 minutes ago, but he’s clearly losing interest as well. It’s only a matter of time until… and there we have it, he’s seen the Instagram notification. Quite a humble end to this discussion, which seems to fit it’s disgustingly mundane origins.