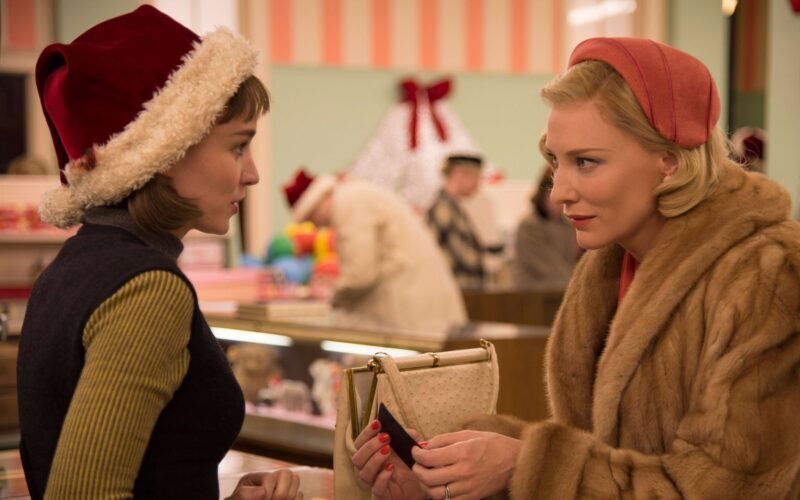 ‘Tis the season for longing looks, meaningful touches, and forbidden love. As we don our gayest and most impeccably tailored apparel, we celebrate the most wonderful time of year, Carol season. Though we watch Carol all year long, this is the time to go all out.

We decorate for Carol season with toy train sets and mid-century motel furniture. Snow, holiday trees, tinsel, and twinkly lights are also in keeping with the season. Traditional Carol season clothing include 1950s silhouettes, red holiday hats, and gloves. And some people go full Carol with a luxurious fur coat.

For music, we listen to Carter Burwell’s ravishing score from the film. Some also consider any 1950s jazz and “Christmas music” in keeping with the season. The traditional greeting for Carol season is a look that says everything. Young or overly enthusiastic types also greet with “Harold, they’re lesbians!”

The most popular Carol season activity is a road trip with our same-sex lover. Motels along the route from New York to Chicago prepare for Carol season revelers by staying exactly the same as they were in the 1950s. A trip to the nearest department store is also a great way to celebrate and shop for Carol gifts. Traditional gifts include vinyl records, cameras, and toy train sets, but any gift from the heart is perfectly in keeping with the spirit of Carol.

With so many activities and traditions, we can’t forget the reason for the season. Though everyone seems to be decorating and gifting for Carol season these days, the holiday has much more significance for queer women. As we gather to eat the traditional holiday dish, creamed spinach and a poached egg, we tell stories of the first time we saw Carol and how it took our breath away.

If you are lonely during Carol season, do not fret. Some say if you write a letter to Carol before New Years Eve, she may just send you a love of your own.