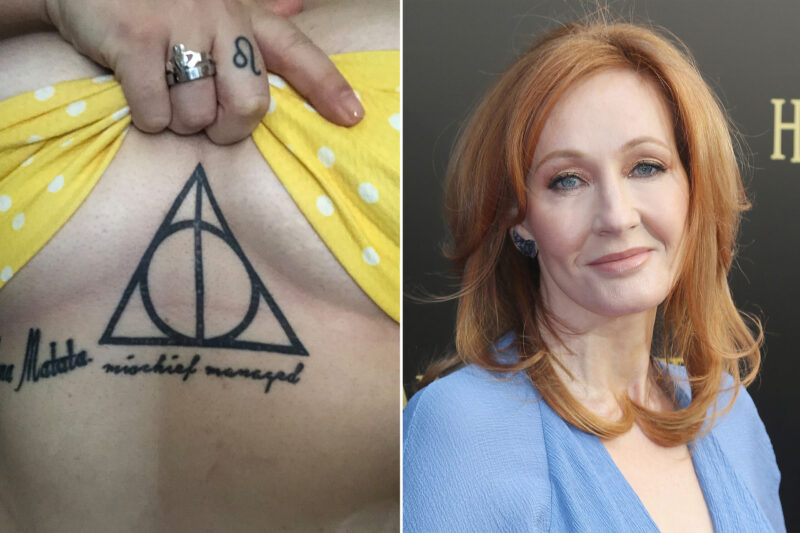 After Harry Potter author J.K. Rowling outed herself as a transphobe in a series of Tweets, essays, books, and pen names, one marginalized group is feeling the painful consequences: cis people with Harry Potter tattoos.

J.K. Rowling’s transphobia has been particularly devastating for Laura Middleton, a cisgender woman with a tattoo of the Dark Mark. “It’s like, how can I comfortably and safely be myself if Wizard Lady bad and me have Wizard Lady symbol?” When asked why she chose a tattoo that was an in-fiction equivalent of a Swastika, Middleton quickly added, “I don’t hate mudbloods, just so you know. Or trans people.”

While Middleton has sworn to stop re-reading this 20-year-old book series, cisgender man Otto Nash said he doesn’t plan to stop reading his favorite very okay books. “It’s not fair that I have to pay out of pocket for an ‘elective’ surgery in order to feel comfortable in my body and day-to-day life,” said Nash, referring to refusing to remove the tattoo of a lightning bolt on his forehead.

Nash also said he will not remove any part of his tattoo sleeve made up of the names of fictional people who died in the Harry Potter series, nor his face tattoo of Hagrid’s beard. Recent studies show that up to 70% of millennials are struggling with regretting their wrist tattoo of Harry Potter’s and/or John Lennon’s glasses.

“It’s heartbreaking beyond just the tattoo. I used to listen to all seven books on audiobook every night. I don’t know how I’ll fall asleep now,” cried cis woman Brianna Preston. “There are literally no other books.” However, Preston doesn’t know if she’ll get the tattoo removed. “What am I supposed to do now? Seek to alter the parts of my body that make me feel uncomfortable?”

Trans woman Kayla Clifton said that while she regrets her tattoo of the Deathly Hallows symbol, she doesn’t have plans to get it removed. Said Clifton, “I just want access to healthcare, please.