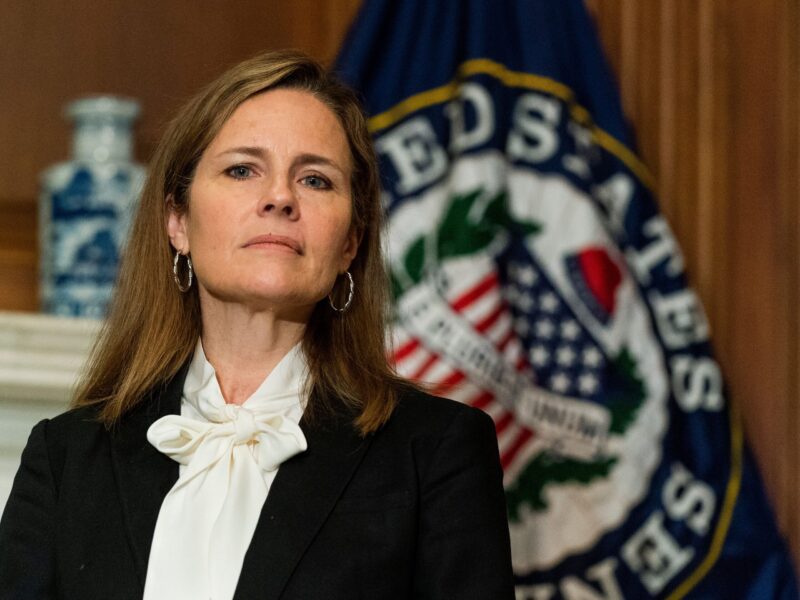 WASHINGTON, D.C.— Speculative fears were validated this week when Associate Supreme Court Justice Amy Coney Barrett expressed “how neat it would be to eradicate members of the LGBTQ+ community.” She then quickly backpedaled to say that she can’t kill anyone, yet, but is just interested in reviewing a case that could lead to overturning Obergefell vs. Hodges to render same-sex marriage illegal again.

Since the addition of Justice Barrett to the Supreme Court, American citizens have been fearful of judicial rollback that could regress to the days when there were no laws or precedents in place to legally protect them, especially same-sex marriage.

“Not that I can really comment on any cases that were already decided by the Court before my tenure,” Barrett commented. “But those little gays and theys need to simmer down. All I meant was how interesting it would be to overturn Obergefell vs. Hodges, not overtly imprison homosexual and transgender individuals, as nice as that does sound.”

She went on to request everyone should just calm down, particularly the lawyers sharing advice with same-sex families and reminding them of their Fourteenth Amendment rights.

Many Americans who supported Justice Barrett’s nomination noted it was just a casual comment made during Supreme Court Locker Room talk, but countless members and allies of the LGBTQ+ community remain fearful of what could come. Justice Barrett doubled down citing that she couldn’t alter the death penalty for homosexuality at this time, but it is something she thinks about from time to time while praying before bed with her family.

“I’m sensing a lot of overreaction, especially from the flamboyant gays. The same-sex ruling could be up for grabs, but that’s it,” said Barrett. “I know some of my past rulings on abortion, gun control, immigration, and capital punishment indirectly led to the deaths of innocent people from marginalized groups, but I had to walk a fine line to accomplish all that.”

During Justice Barrett’s Senate Judiciary Committee hearing in 2020, many raised their eyebrows when she championed her originalist interpretation of the Constitution. “I have to take the framework of what the Founding Fathers intended for this country, which did not include any queers at the time, definitely not like the ones we’re putting up with today.”

Barrett continued to share while she can’t outright off an American citizen that identifies as LGBTQ+, she will certainly look into what the Constitution has to say about it, just to be sure, because she owes that to the American people.