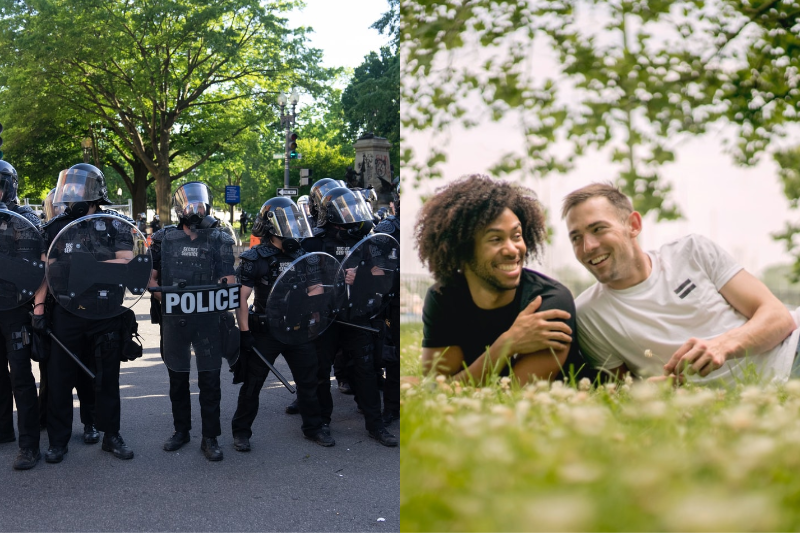 Amid rising national outcry for drastic community safety reform, a new study has calculated that the standard minimum police officer training period takes place over a shorter span of time than most gay relationships. A community dynamics research organization named You and I Kindness Engagement Studies (YIKES) found the average gay relationship lifespan to be 23 weeks whereas average law enforcement training in the United States requires around 840 hours or 40 hours of instruction over 21 weeks.

YIKES conducted comparison between law enforcement training and queer male dating habits in metropolitan areas where both sample groups are most active. The parallel analysis examined key commonalities such as ego fragility and unwillingness to change for others. The study overwhelmingly found that while the average gay relationship is notorious for being short-lived and inadequate at reforming ideologies and behavior, police officer training and its impacts were even more pathetically scant.

“We’ve all heard those tired jokes about how gay relationships end before they even begin,” said YIKES research lead Archer Douglass. “But by comparison, adequate police training never even begins to begin. It’s that brief!”

YIKES data indicated that a police officer is cleared to work in the field in the amount of time it takes the average a gay couple to finish comparing star charts and dancing the Text-Back Tango. Furthermore, by the time a gay relationship implodes in a blowout fight over a suede crop top that was accidentally laundered incorrectly, many new officers are already a fortnight into terrorizing neighborhoods on taxpayers’ dime.

“Based on the data, I would sooner give a gun and community safety responsibilities to a gay couple than to a police officer,” said YIKES analyst Tasha Forrest. “And just to be clear: I wouldn’t give a gun to a gay couple. We tried that in a different study and it was like the Stanford Prison Experiment all over again but even more dysfunctional!”

“I broke up with my boyfriend of 35 weeks when he said he wanted to become a cop,” said case study participant Camden Granton. “21 weeks later, he was done with his training and still as incapable of empathy as before!” Granton was also troubled to learn that while he would never date this man again and hopes no one else ever does, his ex could still be re-hired or reassigned to a new force despite potential deal breakers such as corroborated complaints of bias or excessive force.

YIKES hopes these findings will help policymakers make informed decisions to drastically change the country’s approach to community safety. “When we get our next grant, we want to see if gay relationships would be more stable or less if they were as well funded as the police,” said Douglass.