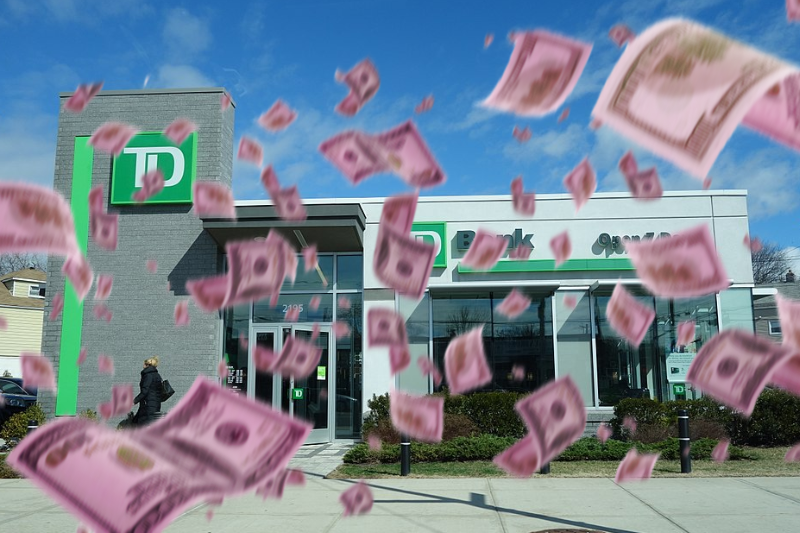 TD Bank is coming out as a huge supporter of LGBTQ+ money by selling fake currency in colorful hues. Members of the queer community can now fully express themselves even when acting as a cog in the capitalist machine!

“We’re not one of those companies that shows up to take your money during Pride,” explained Bill S. Pliss, TD Bank president, at the launch of the pink dollars. “Here at TD Bank, we want LBGTQ+ money not just during Pride, but all year long.”

The pink dollars come in the gorgeous hues of Muff Diver’s Magenta, Inner Asshole Peach, and HIViolet. Judy Garland replaces the president as the face of these dollars, which are emblazoned with “In TD Bank We Slay!” The dollars have no actual market value and cost $600 for a thicc stack.

“I love having money that says, ‘I’m queer, I’m wealthy, and I won’t acknowledge how my class gives me privilege within the community!” exclaimed Stonewall goer Gina Frederick, who gleefully showered the drag queens performing with the uselessly chic pink dollars before being escorted out.

Some critics have stated that the pink dollars are a blatant cash grab that comes with no actual support of the LGBTQ+ community. Supporter of the product Wren Montrose argued, “Yes, we could be spending our money on donations to organizations like The Okra Project, and yes, TD Bank has used their profits in the past to fund homophobic congressmen, BUT! These bills are fun! It’s like Monopoly, but gay!”

“TD Bank supports all kinds of families, especially DINKs,” Pliss explained at the pink dollar launch. “It doesn’t matter if you’re two business ladies—hot—or a DINK family with two high-earning men that smooch—yucky! We’re here for you and your money.”